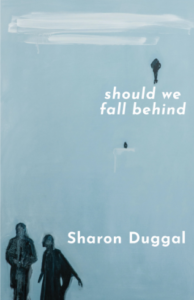 Should We Fall Behind is for anyone with a heart who has ever looked at a person huddled in a cold shop doorway surrounded by everything they own and wondered how they got there.

Jimmy is an alcoholic smalltown boy unsuccessfully running away from his demons who befriends a young woman Betwa, and shares his pitch in a big city underpass, but she suddenly disappears. His disorganised quest to find Betwa takes him to a down at heel suburb and Shifnal Road.

As Jimmy takes up residence in an abandoned car Duggal, in only her second novel, subtly draws into his orbit a grumpy Cypriot businessman, a very angry young single mum struggling to keep her head above water, an isolated Indian woman nursing her husband and a kind hearted bouncer/delivery man.

Almost dispassionately, but never without sympathy, Duggal shows that their actions are driven as much by grief in all its insidious forms as poverty, and they are all in their own way outsiders – either by design or fate.

This is a million miles away from Ken Loach’s tiresome undertones of a nobility in poverty in his movies, and Duggal who is from an inner city background doesn’t sugarcoat how poverty or exclusion can slowly strip away your humanity.  There is a definite hierarchy of poverty, which as anyone who has ever been poor knows can be the case.

Duggal’s skill as a storyteller is to interweave the daily trials of her characters with credible backstories that explain who they are, and how when the chips are down they somehow swim back to memories of lost love rediscovering at least some vestige of their better selves

The really refreshing thing about this often brutally honest novel is that it’s a million miles away from Oxbridge educated novelists writing endless books about their mates whining on about first world problems like not getting tenure, or some sad little affair between privileged academics. It is also far removed from overwrought ‘gifted’ teenagers, devoid of common sense or self-awareness, heading off to Trinity or Oxbridge.

It is far harder to write about real people and keep the reader’s attention, but Duggal manages it with laser sharp precision, so while you might wince at their actions you understand why.

Bluemoose dedicated 2020 to publishing only female writers, and Duggal is the latest in what has been a high-quality year showcasing some important, but all too often neglected real world themes. If this was coming out through a major publishing house it would be getting glowing reviews in all the broadsheets, and be a fixture on the Waterstone’s 3 for 2 table.

It’s on a small imprint, so you will have to work just a bit harder to get this humane and timely work by ordering it from your local independent bookshop, but it is well worth the effort.